Arguably the lake’s most charismatic resident, the black swan (Cygnus atratus) is a distinctive native bird with some intriguing qualities. 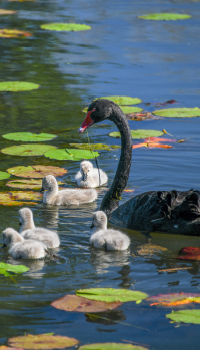 Adult black swans are big – up to 1.4 metres long with a 2-metre wingspan and sometimes weighing upwards of 8 kilograms. Their necks, which already seem long enough, are proportionally the longest of all swans. Their red-orange bills stand out from black and dark grey plumage covering everywhere except beneath their wings, where there are bright white flight feathers. Young swans, called cygnets, are less striking; their feathers are grey and their bills are black. Cygnets are precocious, able to feed and swim on their own immediately after hatching from their pale green eggs.

Black swans lay clutches of up to eight eggs in large mounded nests of reeds and grasses that sit at the water’s edge or float in deep water. Both parents, who pair for life, help to care for the eggs and young. As egg and cygnet, the swan is vulnerable to predators like rats and birds of prey. When the nest is threatened, parents flap their wings, and whistle and hiss loudly. These sounds contrast with their usual high-pitched trumpeting, bugling and crooning. Like most waterfowl, they are unable to fly for a month after breeding due to a coincidental simultaneous wing moult.

Black swans can be sedentary or nomadic; they migrate opportunistically, guided by drought, rainfall and the stability of water sources. Most commonly, they inhabit fresh and brackish lakes, marshes and rivers but, when not breeding, also venture to coastal waters and offshore islands. They choose locations where there is plentiful food. Black swans are herbivorous, eating vegetation and algae in water or on the shore. Along with grazing, they filter-feed using lamellae – fine comb-like projections – inside their bills. Their adaptability means that these birds can be seen almost everywhere in Australia, although they aren’t known in the north and centre. A subspecies of black swan lived in New Zealand before the arrival of the Maori, who are thought to have over hunted the birds to extinction. Then, in the late 19th Century, the species was reintroduced by Europeans who brought over Australian birds. Since some swans have even flown all the way from Australia, scientists consider them as native to New Zealand. Their numbers have increased such that they are now an agricultural pest.

Images by Living and Loving Photography