Mangroves could be the most dedicated mothers in the plant kingdom.

Many mangroves have a distinct mode of reproduction; they are viviparous, bearing live young – a strategy usually associated with mammals. While it does look different in plants, it still requires relatively long, extensive parental involvement.

The life of a mangrove is full of challenges. To live on the edge of water is to live in flux; oscillation between exposure and submersion causes fluctuations in temperature, nutrient availability, oxygen levels and salinity. These factors complicate the survival and settlement of a mangrove, as do currents and waves. Thus, mangroves have had to find a way to help their precious seedlings along. 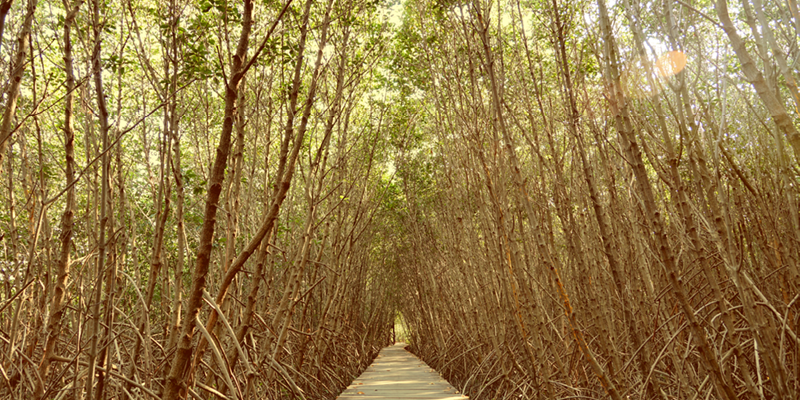 The seeds of most trees germinate in the soil after dropping from their parent. For many mangroves, this simply isn’t an option; the chances of their seeds taking root would be too low. Instead, in species including the local red mangrove (Rhizophorastylosa), the fertilised seeds germinate on the tree, inside the fruit, and grow into a propagule while they are supported by their mother. Capable of sustaining themselves through photosynthesis, propagules are sturdy vessels for the seed. They are buoyant and can go dormant for up to several months, depending on species, which allows them to travel to just the right place and wait for just the right time to establish. Even so, mangroves, nurturing mothers that they are, may hold onto their propagules for at least a year before letting them venture out into the world.

Viviparity is not utilised by every species. However, even mangroves that do not release propagules, like the grey mangrove (Avicennia marina), will carry their seeds to a fairly advanced stage of embryonic development. These mangroves typically also have very large fruits, a botanic mother’s equivalent to a jam-packed lunch box, filled with nutrients for their seeds while they’re exploring the world.

We rarely think of plants as parents, let alone as good parents. Compared to most animals, plants don’t seem to invest much in their offspring after seed production. Thus, mangroves truly do take special care of their little ones.