Australian-born Ken Parry has been tantalising guests all around the Globe with his fine dining cuisine. Ken brings with him extensive skills and knowledge acquired whilst traveling the world working in such places such as: America, Australia and Europe.

From a young age, Ken was very passionate about creating classical marriages of flavour that boast a contemporary twist. His career as an apprentice chef began in the Wembley Hotel, Perth in 1992. After being classically trained in French Cuisine for 4 years, Ken decided to broaden his horizons and travel the globe, gaining all the knowledge and experience that the world had to offer. Throughout his travels Ken not only became the best Executive Chef he possible could, but he also gained the skills to create the finest cuisine.

Upon Ken’s return to Australia he had the pleasure of working for places such as: The Truffle Group (winning them a Gold Plate Award in Tourism and securing himself the prestige title of Event Caterer of the Year); David Jones Department Store; and The Avondale Golf Club where he had the pleasure of serving the then Prime Minister John Howard.

In 2005 Ken returned to Perth to be near his family and continued his cooking career at the Royal Perth Hospital as the Retail Catering Manager.

In 2016 Ken’s career took him and his Family to wonderful Hobart, where he had the pleasure of working in such places as: The Henry Jones Art Hotel and Wrest Point Casino.

Ken has recently relocated to sunny Queensland and continues to flourish and grow his career at Norths Leagues and Service Club as Executive Chef.

Ken Advises, “As chefs we are charged with the ultimate responsibility of creating an experience… a memory… something that can only be achieved by intensifying the flavours and textures of our ingredients to such a level that it incites an emotion.” 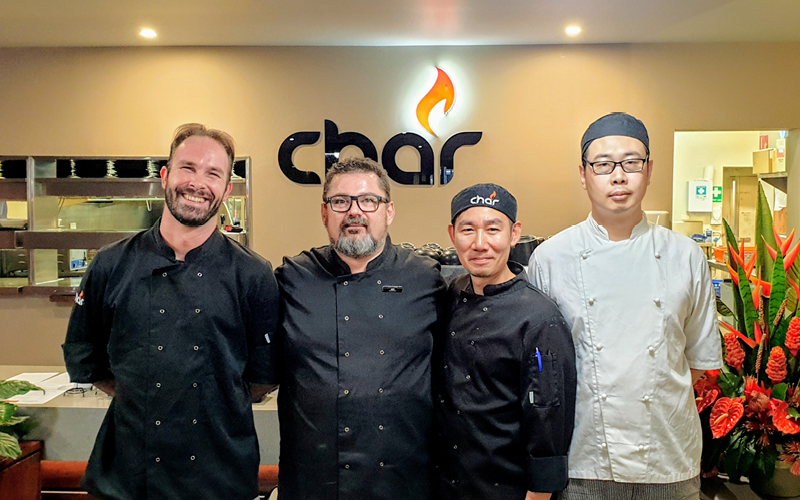 Executive Chef Ken Parry (second from left) with some of his team of Chefs. 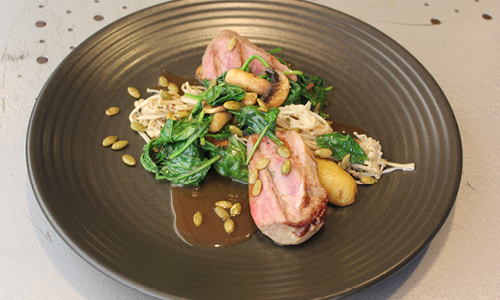 1. Preheat the oven to 200˚C/gas mark 6.
2. Start by pickling the mushrooms. Bring the water, vinegar and sugar to the boil, pour over the mushrooms and leave to lightly pickle for 20 minutes.
3. Meanwhile, to prepare the duck, trim off any sinew from the breasts and place skin-side down in a hot dry frying pan. Cook for 4 minutes on a medium heat – pour off any fat from the pan as it renders out.
4. Turnover and cook for a further minute then turn back on the skin-side for another 2 minutes. Repeat once more as this will render the fat, crisp the skin and take the breast to medium rare. Remove from the heat and allow to rest for 5 minutes in a warm place.
5. For the pumpkin seeds and peanuts, sauté the pumpkin seeds in oil until puffed up, drain from the pan and place onto absorbent kitchen towel. In the same pan add the butter and toast the Peanuts
until golden, drain and combine with the pumpkin seeds.
6. Drain the mushrooms out of the liquid (reserve 1 tsp for the dressing) and allow to dry on absorbent kitchen towel. Heat the butter in a large pan and sauté until lightly golden. Add the spinach to the pan to wilt and season with sea salt to taste.
7. Combine all the ingredients for the dressing, including the mushroom pickling liquid, and taste for seasoning and acidity (Adjust accordingly with more soy, or vinegar to your liking).
8. Place the duck breast into the oven for 3 minutes to reheat.
9. Spoon the mushroom mix onto each plate. Carve the duck breast and season with sea salt placing it onto the pickled mushrooms. Sprinkle the dish with pumpkin seeds and peanuts, drizzle with the dressing and serve immediately.