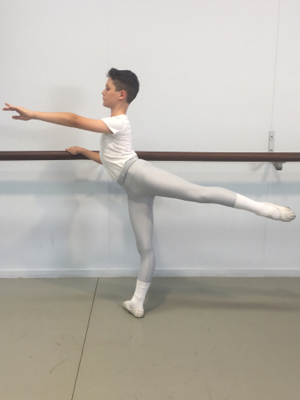 Cooper’s unusual dream is to be a professional classical ballet dancer. Fortunately he has the talent and is already impressing the right people to make his dreams a reality.

Cooper (aka #ballet_boy_official) has been dancing since he was 5. His love and passion for his art has grown from the moment he slipped on his first pair of ballet slippers and stepped as the lone boy into a studio full of surprised girls.

Cooper has a very impressive dance history to date. He started his training at Five Star Dance Academy where Principal Astrid Chiochiu and her husband Anatoli fostered in him an obsession for the dance. Cooper then added Steps Dance Company to his ballet family last year for further training and polishing under the watchful eyes of Principals Julieann Turner and Jomel Purtill.

In addition to his regular training, Cooper was invited to join the Queensland Ballet Academy in 2018. Here he continues to train under the guidance of Mr Paul Boyd and Artistic Director Li Cunxin (Mao’s Last Dancer). As part of his experience with Queensland Ballet Cooper performed with the company in their 2018 productions of “Cinderella” and “The Nutcracker”, which only succeeded in convincing him that the stage was where he belonged.

The Australian Ballet School has also selected Cooper to participate in their Interstate Training Program for 2019, meaning numerous trips to Melbourne will be undertaken this year.
Cooper was also chosen last year to participate in choreographic workshops and performances of the ballet Ne:Roi; a new ballet currently being created by the illustrious Ken Ludden, Director of the Margot Fonteyn Ballet Academy, Arizona (USA). Mr Ludden was sufficiently impressed by Cooper’s talent and dedication and cast him in the role of the young Prince Uno in the ballet for the foreseeable future. All of these achievements are significant for a boy of only 11 years.

However, it is his future that is truly breathtaking and inspiring.

Cooper has been invited to attend a two week scholarship at the Margot Fonteyn Academy of Ballet (MFAB) in Arizona (USA) in mid-April 2019 where he will be privately instructed by Mr Ludden. An honour rarely extended to any student, anywhere in the world.

He has also received an invitation from Mr Ludden to visit Riga (Latvia) in late April and to perform in the Eventus Spring Concours International Youth competition, representing MFAB.

Here Cooper will also work with Fonteyn Fine Arts International (FFAI) and as a result be a foundation student of their first teacher certification program.

In addition to this, Mr Ludden has offered Cooper a full time scholarship for training at the MFAB when he turns 16.

Then, in mid May 2019, Cooper has been requested to attend celebrations and perform at the 100th Birthday Anniversary of Dame Margot Fonteyn, to be held at the new MFAB studios in Arizona and attended by ballet luminaries from around the world. Cooper will also receive his FFAI Level 1 Certification at these celebrations.

And because all of this is just not enough for our ballet boy, he is then heading to the Bolshoi Ballet Academy in New York for their Summer Intensive Program in July 2019.

Behind the scenes is a proud and dedicated single mum of three, who is doing all she can to make her son’s dreams become reality. However, Tara is now at a point where she needs help, financial help, and a lot of it. These international invitations to dance do not come with any funding for travel, accommodation, meals, clothing or shoes. It is up to Tara to fund these once in a life time opportunities for Cooper.

Cooper and Tara both know that a life of ballet means he must excel in and uphold the values of a dancer: commitment, discipline, poise, quality and integrity. Even at his young age, Cooper is prepared and has already demonstrated these values.

Cooper has said to Tara, “I would happily spend my whole life in a ballet studio” and “I would give up everything, before I gave up ballet”.

Please donate to help Cooper fulfill his destiny, and live his best life through ballet at https://bit.ly/2VCMTWH